A short video I made with Lisa May Thomas in West Wales.

Several years ago I started experimenting with stop motion animated dance videos. I wanted to explore how improvisation might translate to frame by frame animation. I didn’t choreograph or storyboard the videos – the idea was to allow each movement to emerge from the last, only planning the next 10-15 frames ahead at a time. This led to a curious relationship with spontaneity and time. Decisions and movement which were split-second in the body took maybe 5 minutes to animate. The first example was a Solo.

In the next video I experimented with animated Contact Improvisation (in part inspired by Katrina McPherson’s films).

The last video in the series is an unfinished test. At the time dance in shopping centres seemed to be everywhere and I was interested in the relationship between dance (dancing bodies) and the purpose of the architecture – to coerce people to shop with confidence. I had some idea of what a bodily rebellion in a shopping centre might look like and actually thought it was more interesting to identify and explore choreography that was coherent with the architecture and message of consumerism. Was there a “body of confidence” and what did it look like? This seemed far more subtle and nuanced stylistically than the propaganda from the 1930s and 40s that I was also looking at.

In the end I didn’t have the time or resources to develop the idea (I had plans for a whole dance company and large scale set!) but as with all three videos stop motion did provide a means of thinking that left visual documentation. The process required me to analyse movements and think about the sequence of initiation, weight, release etc and translate that to the puppet. There was also a curious relationship between sensing the movements in my body and standing for long periods of time in often quite tense positions doing the animation.

Motherland was a video I made during the Artists Exchange at the Ponderosa Tanzland Festival in Germany 2008. An international gathering of around 30 artists from across Europe and beyond worked together for 10 days both on individual projects and collaborations. The video grew from some experiments with a moving camera into a kind of postcard from Ponderosa. The strongest memory I had was the faces of the participants.

Motherland from Noel Perkins on Vimeo.

Another project involving participants was “The Donkey Princes” a film made by Johanna Chemnitz, Sopie Malmberg and Annika Nilsson 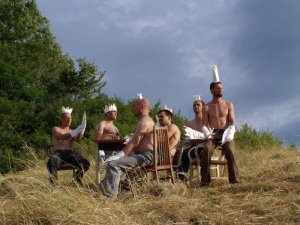 Bathosphere was an experimental video with soundtrack by Tim Sayer. The work began life during walks along the beach where I noticed I was as visually drawn to the “pollution”- the flotsam and rubbish, as the “natural environment”- the seaweed and seagull feathers. This prompted thinking about the way we use the world “natural” and the complexity of our notion of beauty. The iridescence sheen of oil is beautiful (in my eyes) yet its also toxic. The idea was to experiment with an aesthetic deep dive into the visual possibilities of this environment, rubbish and all, and see what it might evoke transformed beyond its immediately recognisable form.